Kings Theatre Glasgow first opened its doors in 1904 and is one of the most historic and significant theatres in all of Scotland. It was built as the sister theatre for Theatre Royal for Howard Wyndham Ltd. It serves primarily as a receiving house for touring dance, musicals, comedy and acrobatic performances. While the Glasgow City Council currently owns the building, the theatre is operated by the Ambassador Theatre Group. 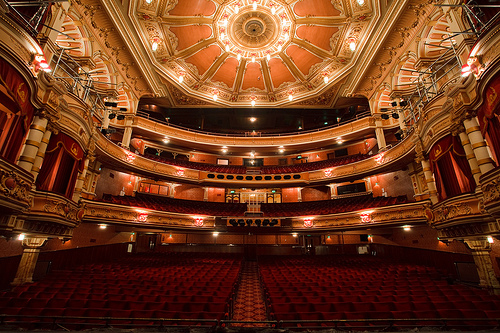 Kings Theatre was designed by famed architect Frank Matcham who used the building’s corner location effectively by designing two facades for the building. At the time of construction, the building cost £50,000, which would equate to £3.5 million today.

Prior to World War II, an iron canopy wrapped around the front of the building. The unique facade facing bath Street features a mix of different styles influenced by Art Nouveau and Baroque. Two two-storey pavilions are situated near the Bath Street elevation. One of these provide access to the main foyer. Female statues stood atop both pavilions but were removed during World War II to prevent them from becoming damaged. Unfortunately, the statues were misplaced and never recovered.

In 1986, the western side of the Bath Street elevation was extended to include a new office, dressing room, wardrobe room and stage door. King’s Theatre underwent another renovation in 2008 in which the interior was refurbished to restore the theatre to its former glory.

The King’s Theatre Glasgow offers many amenities and facilities that patrons can take advantage of, including bars.

Patrons can make their evening more memorable with the Ambassador Experience. Packages may include a drink or access to the Ambassador Lounge and savoury nibbles.

The theatre also features a new bar, The Picture Lounge. This cocktail bar is open on show evenings from 6PM and during the interval. Patrons can enjoy a glass of wine or champagne. Tables can be reserved ahead of time.

King’s Theatre Glasgow also plays host to numerous workshops throughout the year. People of all ages participate in these events, which take place nearly every week. Backstage tours are also available as well as workshops that teach guests about the productions at the theatre.

The theatre features three transfer seats and five wheelchair spaces in the rear stalls. Access is available from Elmbank Street. An infrared audio system is also equipped in the theatre for patrons with hearing disabilities. Access to this audio system can be granted via a necklace or headset. Guide and hearing dogs are also welcome in the theatre.

Over the years, the King’s Theatre has played host to several famous shows and seen its fair share of excitement. Some of the most memorable events to take place at the theatre include:

Getting to the Theatre

The King’s Theatre Glasgow plays host to a number of touring shows throughout the year. The majestic design of the theatre is a big part of the reason why the venue draws in such large crowds. With views of the stage being favorable from just about every seat in the theatre, an evening at the King’s Theatre is sure to be an unforgettable one.

You can find the address here, get contact details here and take a look at the seating plan here.

This website uses cookies to improve your experience while you navigate through the website. Out of these cookies, the cookies that are categorized as necessary are stored on your browser as they are essential for the working of basic functionalities of the website. We also use third-party cookies that help us analyze and understand how you use this website. These cookies will be stored in your browser only with your consent. You also have the option to opt-out of these cookies. But opting out of some of these cookies may have an effect on your browsing experience.
Necessary Always Enabled
Necessary cookies are absolutely essential for the website to function properly. This category only includes cookies that ensures basic functionalities and security features of the website. These cookies do not store any personal information.
Non-necessary
Any cookies that may not be particularly necessary for the website to function and is used specifically to collect user personal data via analytics, ads, other embedded contents are termed as non-necessary cookies.
SAVE & ACCEPT